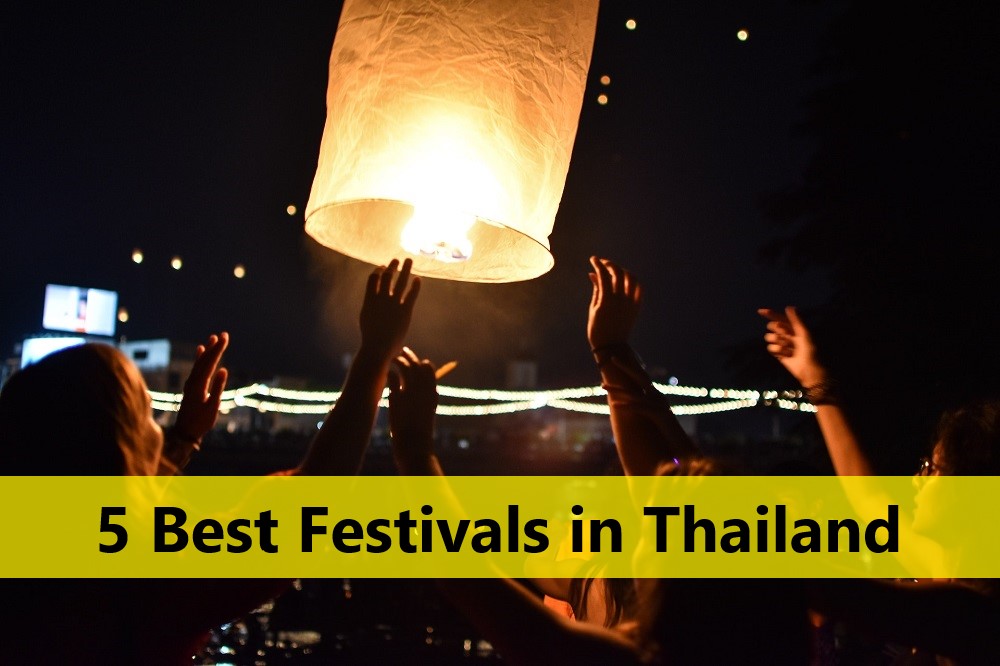 Thailand records the highest number of public holidays with several festivals taking place throughout the year. Festivals celebrated in Thailand are mostly based on Buddhism, and they usually coincide with seasonal changes.

Astrology and renewal are given utmost importance in Thai culture. Every gesture and change in the sky has its own meaning.

It is believed that the customs followed in Thailand will bring good luck for the future of the people. During these festivals people dress up in traditional clothing, visit the temple, pay respect to Buddha and their ancestors.

This blog will talk about the 5 of the best traditional festivals in Thailand that attract tourists globally. If you’re traveling or intending to travel to Thailand on a holiday, make sure to be a part of these celebrations and witness the expansive Thai culture. 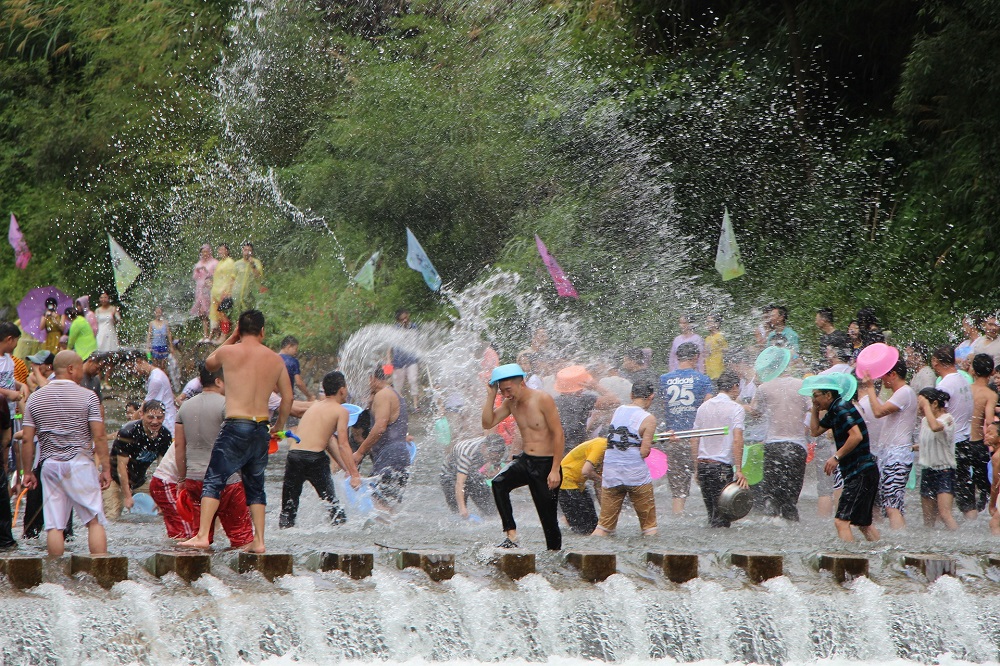 Songkran festival or better known as the water festival is celebrated annually from the 13th-15th of April to mark the beginning of the Buddhist new year. It’s one of the biggest festivals celebrated in Thailand that signifies new beginnings, new life and good fortune in the coming year.

The festival  is celebrated with parades, folk performances, dancing and water play along with several rituals and religious ceremonies. The participants splash water on one another which they believe will wash away their bad thoughts, intentions and actions and will bring blessings into their lives in the new year.

Songkran water festival occurs during the hottest time of the year. Foreigners across the globe join in celebrating this festival. You are sure to find many water playing areas, cultural sites and party hubs across the country during this season.

If you want to be a part of it, be in appropriate clothing, you are going to get wet and get a water cannon for yourself. Keep your belongings safe from water and pickpockets. Remember! Songkran festival is a cultural and religious festival, so be respectful. 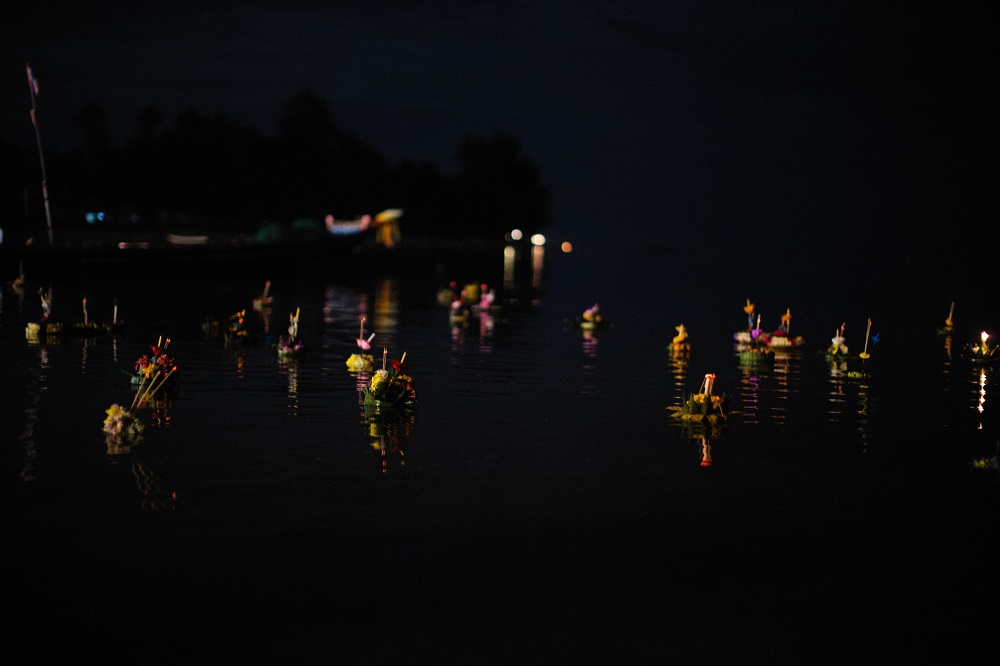 Popularly known as the festival of lights–Loy Krathong is a remarkable festival  in Thailand apart from Songkran. To express gratitude to the goddess of water the Thais gather around the lakes, rivers and canals in the evening of Loy Krathong, to release small candle lit vessels called “krathongs” floating onto the water.

The Thais believe that the candlelit vessel that they release to the water takes away misfortunes, making way for a new beginning. It is also believed that if the candle on your krathong stays alight until you can no longer see it, that it is a sign that you will have blessings in the coming year.

The Chao Phraya River, in Bangkok, is the center that holds celebrations with krathong-making workshops, firework displays, boat processions, cultural performances, and many other activities. You will also see people floating their krathongs in lakes, beachfronts, and rivers elsewhere.

The Loy Krathong festival in Thailand usually falls in November and the date varies each year. To be a part of it: booking a hotel by the river will be great and buy a krathong and have it ready to experience the festival. 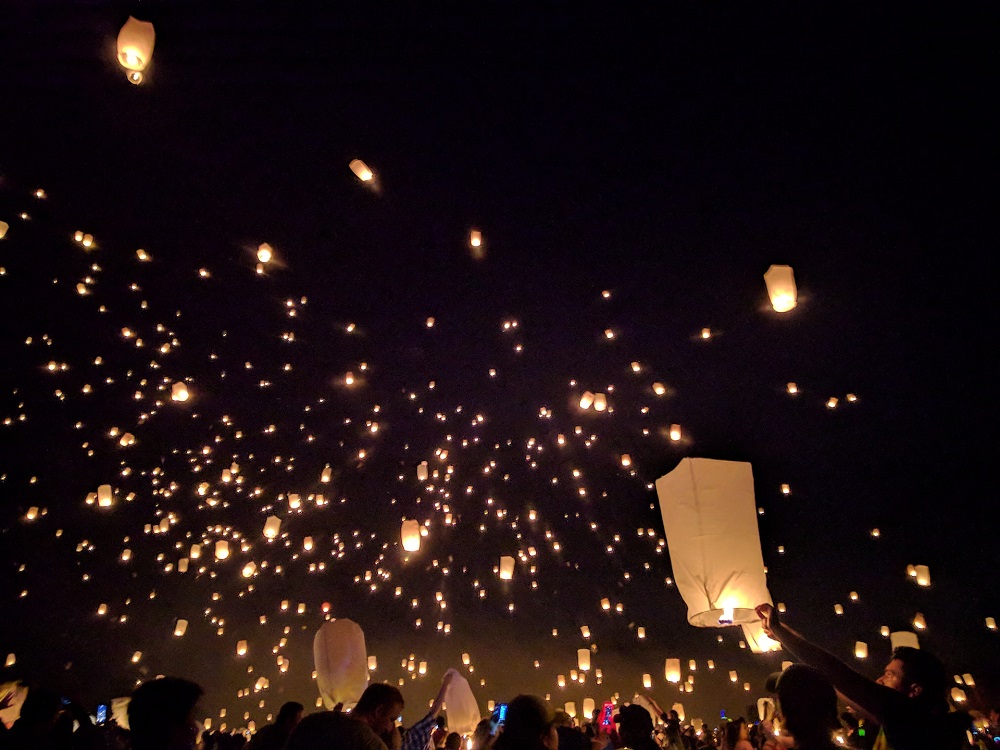 Yi Peng, also called the lantern festival, is celebrated in tandem with Loy Krathong. During the festival thousands of candle lit lanterns called “khom loi” are released to the sky.

It is truly incredible to behold. The festival is celebrated with religious events, parades, lantern displays, music performances, fireworks, and food, along with the lantern release.

Yi Peng lantern festival Thailand is primarily celebrated in the northern region, and Loy Krathong is celebrated throughout the country. The largest Yi Peng celebration is hosted by the ancient capital Chiang Mai, of the former Lanna Kingdom. Yi Peng is a traditional northern festival, and the centerpiece of the celebration is a swarm of flying lanterns.

The ceremony includes dance, music, and drama. Buddhist monks gather for a group meditation just before the lanterns are released. The lanterns are then launched while fireworks are set off. Yi Peng festival and Loy Krathong festival fall in the month of November, but the date varies each year.

Mekong Naga Fireballs is one of Thailand’s festivals that has captivated visitors from all over the world. A massive number of pinkish-red balls of light are seen moving into the sky at night beside the Mekong River without a sound or apparent human interaction.

They can fly up to 600 feet in the air. Locals believe it is the work of a serpent-like creature with divine powers known as Phaya Naga, while scientists believe it is caused by sulfur combustion in the river’s marshy environment.

People gather at the Mekong River every October- November to witness this magnificent site, whether it is a scientific phenomenon or the work of a water god.

Suggested Read: Why You Should Travel: 6 Key Benefits

Ubon Ratchathani, also known as the candle festival, is one of the best festivals in terms of showcasing Thai artists’ skills and talents. During the festival people carry intricately made wax carvings in an elaborate parade to Buddhist temples.

Massive wax sculptures are created by the influence of modern art and traditional aesthetics to be used at the parade on huge floats. Thai and Hindu folklore characters and mythology are typically carved and intricately decorated in beeswax.

The candles symbolize lifting the gloom in preparation for the rainy season. The candle lit parade is an ethereal sight and is truly unforgettable for all.

The visitors fully enjoy the merriment and festivity in the city brimming with this visually stunning experience while learning more about Thai traditions and customs. Ubon Ratchathani candle festival is held in Isan province,the southeastern region of Thailand in the month of July.

The procession takes place on a full moon day which marks the beginning of Buddhist Lent. A competition is also organized for the candle sculptures artists in which artists from across the globe compete. You can choose to get to Ubon Ratchathani from Bangkok via trains, buses, and planes.

Contact Travelco to get Thailand tour packages from Sri Lanka.

Editorial Staff at Travelco are experts in Global Tourism.

No comments to show.